Salva Dut grew up in Sudan, the largest country on the African continent. One school day in 1985, the sound of gunfire in the streets prompted Salva’s teacher to hurry all the students out the back door. Salva had heard rumors of the war in his country; now it had come to his village. In the chaos that followed, Salva ran from the danger, but was unable to get back to his home or find his family. He became one of a large group of people who tried to escape the war by walking to Ethiopia and then to Kenya. Eventually, he helped lead over one thousand young boys, known as the Lost Boys, on their harrowing journey. 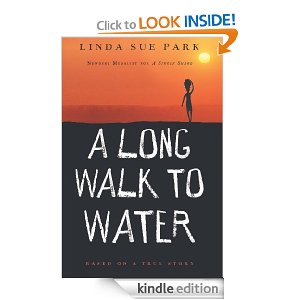 In A Long Walk to Water, author Linda Sue Park shows how Salva spent years running from the dangers of war, hunger, and fear, and eventually how he was able to help many of the villages ofSudan. It’s told alongside the story of Nya, a village girl who walks every day to fetch dirty water for her family to drink, the only water available in a country plagued by drought. It’s an amazing story of true courage and determination amid the horrors of war and poverty.

← Could you do this?
Shakespeare and Me →