A Stewardess on Titanic

When the Titanic left Southampton on April 10, 1912, her crew numbered 892. Twenty-three of them were women, eighteen were stewardesses. They served morning and afternoon tea, made beds, tidied staterooms, and cleaned public rooms. They earned approximately $210.00 per year. 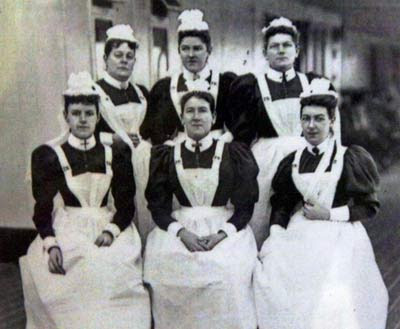 Some of Titanic’s first class stewardesses

Violet Jessop, 24, was born in Argentina, the child of Irish immigrants. When her father died, her mother and Violet returned to Britain. Violet attended a convent school, but gave it up to become a stewardess when her mother became ill. She first worked for the Royal Mail Line, then for the White Star Line aboard the Olympic. She was aboard the Olympic when it collided with the HMS Hawke in 1911.

Friends encouraged her to join the Titanic for the experience. In her memoir, she stated how she enjoyed a chance to take in some fresh air during the evenings on board. “If the sun did fail to shine so brightly on the fourth day out, and if the little cold nip crept into the air as evening set in, it only served to emphasize the warmth and luxuriousness within.”

On the night of April 14, Violet was nearly asleep when Titanic collided with the iceberg.

”I was ordered up on deck. Calmly, passengers strolled about. I stood at the bulkhead with the other stewardesses, watching the women cling to their husbands before being put into the boats with their children. Some time after, a ship’s officer ordered us into the boat (16) first to show some women it was safe. As the boat was being lowered the officer called: ‘Here, Miss Jessop. Look after this baby.’ And a bundle was dropped on to my lap.”

Following rescue by the Carpathia, Violet cared for the baby until a woman ran up and grabbed him away.

”I was still clutching the baby against my hard cork lifebelt I was wearing when a woman leaped at me and grabbed the baby, and rushed off with it, it appeared that she put it down on the deck of the Titanic while she went off to fetch something, and when she came back the baby had gone. I was too frozen and numb to think it strange that this woman had not stopped to say ‘thank you’.

During World War I, Violet returned to sea as a nurse aboard Britannic, Titanic’s other sister ship. The ship was sunk in the Aegean Sea in 1916. Violet jumped from a lifeboat and hit her head on the ship’s keel. Nevertheless, she was rescued once again.

Violet spent forty-two years at sea. She had a brief marriage that ended in divorce, and never had children. She died at the age of 83.

← The Last Man to Know
The Invisible Crewmen →