The Boat That Went Back (Part II)

In Lifeboat 14, Fifth Officer Harold Lowe, 29, blew his whistle and ordered that several boats near him, including Boat 4, tie together and redistribute the passengers more evenly. When that was done and the cries from the water subsided a bit, Lowe felt it was safe to return to rescue people from the water. Until then, he felt the boats would be sunk by hundreds of people attempting to climb in.

Lowe told the US Inquiry, “I transferred all my passengers…about 53, from my boat and equally distributed them among my other four boats. Then I asked for volunteers to go with me to the wreck…I went off and rowed to the wreckage and picked up four people alive. But one died, and that was Mr. Hoyt of New York. It took all the boat’s crew to pull this gentleman into the boat, because he was an enormous man…I propped him up at the stern of the boat…unfortunately he died. But the other three survived.”

Able Seaman Joseph Scarrott, with Lowe at the time, described the scene. “We tied our boats together so as to form a large object on the water which would be seen quicker than a single boat by a passing vessel….taking one man from each boat so as to make a crew, we rowed away amongst the wreckage. When we got to it, the sight we saw was awful. We were amongst hundreds of dead bodies floating in lifebelts. We could only see four alive…One of these we saw kneeling as if in prayer on a part of a staircase. He was only about twenty yards away from us but it took us half an hour to push our boat through the wreckage and bodies to get to him…we put out an oar for him and pulled him into the boat…As we left that awful scene we gave way to tears. It was enough to break the stoutest heart.”

Collapsible Lifeboat B had fallen into the water from the Titanic upside down. About 25 passengers and crew swam toward it and climbed on the overturned boat. After Officer Lowe and his crew rescued the four men from the wreckage, they spotted Lifeboat B and those on top or clinging to it in the water. They pulled alongside and picked up “about 20 men and one woman.” Another three had already perished, which Lowe decided to leave with the craft. Another died prior to rescue by the Carpathia. All living passengers and one body were taken aboard. 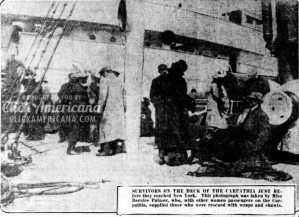 Harold Lowe had worked aboard ships ever since he ran away to sea when he was fourteen. The voyage on the Titanic was his first in the north Atlantic.

Following rescue, he married in September 1913 and had two children. He continued to work at sea and was made a commander in the Royal Naval Reserve during World War I. He died at the age of 61.

← The Boat That Went Back (Part I)
Titanic’s Tennis Pros →

One Comment on “The Boat That Went Back (Part II)”